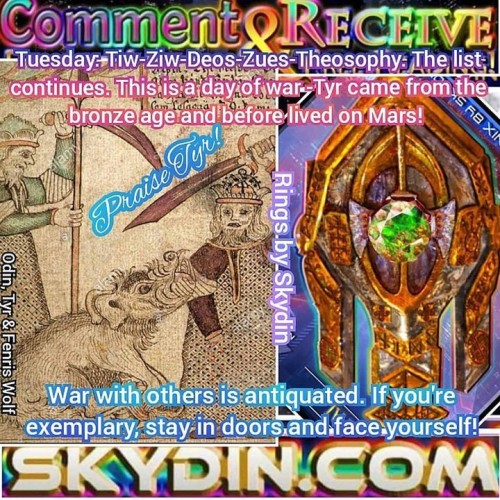 TUES-DAY receives its name from an ALIEN GOD – the Bronze Age God of the Skies Tiwaz. He is associated with Mars and may very well have been from Mars! I present to you the Scandinavian Ancient Aliens! 🔥⚡👽🌟🦋👑🌷 His sword is named after Mars (a Norse name) and historically there are records of it, and it even gave power to those historical figures who possessed it, or should I say those who were possessed by it? These are the Ancient Aliens of Scandinavia! And like all Great spirits and Gods they will be with us when we Terraform Mars! 👉Content ALWAYS Original, By Skydin Zeal 👉Support this Artist, share, be blessed and visit http://www.skydin.com 👈 🔥⚡👽🌟🦋👑🌷 Tyr, Ziu, Tiw – Ancient Bronze Age, Proto-Germanic God of War, of Peace, of Self-Sacrifice, of Honor and Honesty. God of Giving, of Law, Saint of Soldiers, Police Officers, Warriors, of those at the tops of towers who maintain the world for humanity today. Skydin Zeal🔥⚡👽🌟🦋👑🌷 🔥🌟💥⚡☀️✨ I am looking for a quality SPIRITUAL STORE or ART GALLERY to sell my jewelry. I am a rare, tireless entertainer, salesperson and psychic. I have huge social media reach and can work day and night continuously! I don’t even need to eat, but there’s one thing I won’t do and that’s be complacent! If you would like to make a connection happen contact me. If it works out I will pay you! 💜🗽💜🎿💜❄️💜🦌 For many years I have taught spiritual classes on primarily Norse & Egyptian spiritual practices with NYC’s Edgar Cayce & Meta Centers. I host large meditation events on several fields, one being remote viewing areas of the Moon and Mars! I also help seekers view their past and future lives and curate fine art shows to benefit underrepresented extremely talented artists! #godofwar #skygod #zeus #martiangod #tuesday #tyr #tiwaz #mars #ancientaliens #Stargate #starseed #pleiadian #anunnaki #paranormal #aliens #alienlife #extraterrestrial #alienart #futurelives #lifeomars #martiancivilization #Futuristicart #scifiart #futuristicfashion #Futuristicart #area51 #nibiru #ancientaliens #giants #nephilim — view on Instagram https://ift.tt/2TEP6FO

from Tumblr https://ift.tt/3jRXz35
via IFTTT