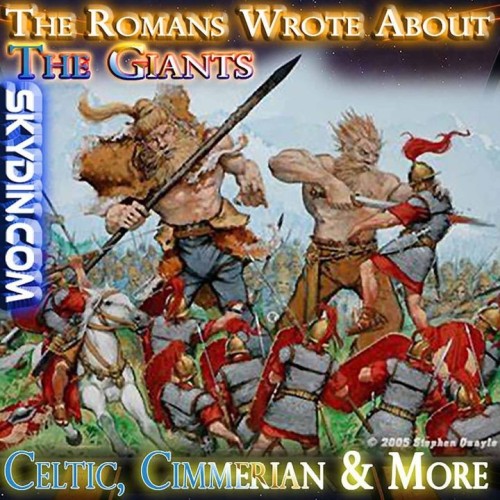 CIMBRI GIANTS! sometimes considered Celtic were documented by the Romans. The Romans had devised systematic genocide of giants and perhaps mythological beings. (There are animals accepted as real even today that could easily be considered supernatural). The Celtic giants were said to have tremendous magical power and a glare that could kill! I say that which exists is so by an all-God’s will. Man should not seek to destroy the divinely appointed so he can appoint himself. Right now I ask what were THE ANCIENT GIANTS all across the world to you? Please answer in the comments. To me they were no different than giant reptiles the giant plant life and insect life. To me the scale of things is all relative to air density. All of what’s above the sea is in fact a different kind of sea. The same as can be said for outer space and it was described as such in olden text written by prolific scholars. But today’s history books can’t allow you to know that the Giants were us and that these humanoids live during the Jurassic. I have ideas why that is but I have a feeling you haven’t even more interesting answer! Blessings! 🔥⚡👽🌟🦋👑🌷 👉Content ALWAYS Original, By Skydin Zeal 👉Support this Artist, share, be blessed and visit http://www.skydin.com 👈 🔥⚡👽🌟🦋👑🌷 For many years I have taught spiritual classes on primarily Norse & Egyptian spiritual practices with NYC’s Edgar Cayce & Meta Centers. I host large meditation events on several fields, one being remote viewing areas of the Moon and Mars! I also help seekers view their past and future lives and curate fine art shows to benefit underrepresented extremely talented artists! 🔥⚡👽🌟🦋👑🌷🔥🌟💥⚡☀️✨ I am looking for a quality SPIRITUAL STORE or ART GALLERY to sell my jewelry. I am a rare, tireless entertainer, salesperson and psychic. I have huge social media reach and can work day and night continuously! I don’t even need to eat, but there’s one thing I won’t do and that’s be complacent! If you would like to make a connection happen contact me. If it works out I will pay you! 💜🗽💜🎿💜❄️💜🦌 … … #Stargate #starseed #pleiadian #anunnaki #paranormal #aliens #alienlife #extraterrestrial #alienart #cimbri #celticgiants #lifeonars…https://ift.tt/3rw3QDu